Kabeljou Fishing On The Namibian Coast!

Description:
The silver kob is a robust fish and is one of the most largest yet delicately coloured fish of the kob family. The overall body colour is silvery and live specimens have a striking pearly pink sheen on the head, flanks and dorsal surface. Underwater an arrow of brilliantly silver "portholes" can be seen along the lateral line. The fins are translucent or dusky. The head and body is silvery, becoming a green or brown with a bronze sheen dorsally. The inside of the mouth is pale yellow to yellowish grey. The silver kob belongs to the family Sciaenidae. The sciaenids are also called croakers or drums because they can produce a variety of sounds by means of muscles that vibrate the gas-filled swimbladder. In the silver kob these drumming muscles (along the inside of the body cavity) are only present in males.

Distribution:
Southeast Atlantic: Namibia southwards around the Cape of Good Hope and northwards at least as far as the Kei River in South Africa. Between Cape Agulhas and the Kei River the adults are rarely found in the surf zone or estuaries, but are commonly caught by ski-boaters and trawlers at a depth of 10-120m. West of Cape Agulhas and up the west coast to Namibia silver kob are found in the surf zone.

Reproduction:
Medium, minimum population doubling time 1.4 to 4.4 years. Main spawning season extends from August to December (in Namibia October to March) with a peak in spring. On the Namibian coast spawning adults migrate south in summer to spawning grounds at Sandwich Habour and Meob Bay. The larvae drift north with the current to nursery areas off the west coast recreational area. When juveniles reach about two years of age they move further north to adult feeding grounds in the Skeleton Coast Park waters. At the end of the spawning season adult Kabeljou leave the spawning grounds and return to the adult feeding grounds. Females mature at about 31-38cm and males at 29-31cm.

Seasonal Movement:
Seasonal movements of silver kob in Namibian waters: A seasonal migration pattern for silver kob, Argyrosomus inodorus is elucidated based on tag-recapture data. Spawning adults start migrating southwards against the north-westerly surface currents at the beginning of the austral summer from the northern end of their distributional range to their spawning grounds, Sandwich Harbour and Meob Bay, at the southern end of their distributional range. It is suggested that after spawning larvae drift north with the current to the nursery areas, the West coast Recreational area (WCR). When juveniles reach the age of approximately 2 years they will gradually move north towards the adult feeding ground, the Skeleton Coast Park (SCP) waters. At the end of the spawning season when the surf-zone water temperature decreases to about 15 °C adult silver kob complete their spawning cycle by returning to the adult feeding ground, probably moving slightly offshore and with the current. 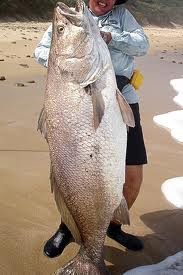 Bait:  The kabeljou takes a variety of soft baits. Live shad, mullet, karranteen and mackerel is excellent if you can get them, and whole dead baits of the aforementioned species also work well, as do fillets and mixed grills. Your best baits will be fresh squid (chokka), pilchards(sardines) mud prawns, When using fillets, make the bait large and compact, and guard against throwing it too deep. Obviously, a whole, fresh sardine is a good bait too and is best hooked in the way illustrated in the "dead bait hook placement" figure on the right. Make sure all your baits lie on the ground. Live baits are most productive for the 12kg to 20kg fish and should be attached to the hook as shown in the figure on the right. Large kob from the shore demand patience, rugged tackle and rigs capable of hurling a big bait plus several ounces of lead far out to sea. If a giant kabeljou is cruising nearby then you will have a far better chance of attracting his attention with a massive hook offering than a couple of scrawny little worms more suited for a dab.
Remember, the bigger the bait the bigger the kabeljou you will catch!
bloodworm (worms are prohibited in Namibia) and slowly retrieved lures (spoons). Mussel is a good bait fished over rocks, but you need to make a big parcel of several mussels all bound together with elastic thread. Record sized Kob can also be caught with freshly skinned octopus leg, Sardine or Sardine and Tjokka(Squid) combinations. 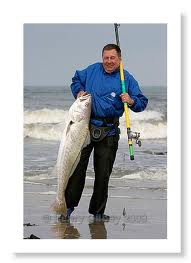 Where:  Kabeljou is mainly caught by shore angling over sandy areas, in estuaries or out at sea. They will sometimes be taken in exceedingly shallow water just behind the shore break, where they feed on their prey. At the bottom of deep channels and gutters or steeply shelving beaches are good spots in which to try, especially if there is an access channel to deep water nearby. In the sandy sections of the surf always look for ginger beer water, or patches of discoloured milky green water, where small fish will hide, as you will very seldom make good catches of kob in clear blue water. Also look where the sand is being disturbed by wave action - as this uncovers the worms and other little organisms on which the smaller fish will come to feed.

When:  Firstly, your timing has to be spot on for going fishing. The best time will be during the rising tide. The correct spot is another important factor. Not to rocky and the current should not be to strong. The sea water temperature must be between 13-16°C for catching kabeljou. For success with kob, you need no special tackle, but rather an understanding of how kabeljou operates and when it is most likely to feed. Kob spend most of the day hiding in gullies and deep holes, safe from predators and waiting for an opportunity to hunt their prey of choice. Kabeljou prefer to ambush their prey as they are not as speedy as garrick and kingfish, and therefore prefer to hunt at dawn and late afternoon to dusk, when visibility is poor and they have the advantage. Best catches of these sought after fish are made at night.

Wheather:  The weather should be calm, 3 days after the south-west wind has been blowing and a water temperature of around 14°C.

Tides:  The biggest spring tides falling twice each monthly cycle always provide the best of the action. Try to fish hardest on the tides rising towards the peak spring. Kob can still be taken as the tides drop back after the peak, but the results are not as good. Neap tides can produce kob, but rarely from the shallow marks. If you must fish neap tides, try to go for deeper water over rough ground.

Cast:  Kabeljou is normally found when casting deeper. A bait at 90m stands a much better chance of catching a kob than one at 70m. Casters capable of putting a decent lug of bait at 120m will increase their catch rate accordingly. Good casters can really make their skills shine when the weather is at it's most foul with strong onshore winds. They'll punch a bait 70m out in to a raging sea and catch kob. Average casters struggle to make 50m and are fishing baits in the surf tables and wash which carries plenty of weed, but few, if any kob. Realistically, if you can manage to cast a maximum of 70m, which is the average cast, concentrate on the deeper steep beaches and rocky gullies where the fish are closer in. Only if you are consistently putting baits over 100m should you think about fishing the shallower beaches.

How:  Kabeljou is a vigorous feeder with a hard bite, a strong fighter and very strong on the line. No matter which bait is used, the Kob has a very distinctive way of feeding. Usually the bite of the kob is a series of hard pulls, followed by a few quiet seconds and then a series of jerks. Even when using live bait the fish may be struck almost immediately. Sometimes they will feed very timidly, especially when the water is calm. Then you may have to wait for the bite to develop, or provoke a firmer bite by moving the bait slightly. Count to 10, lift the rod, don't strike vigourously and do not strike too soon!

Notes:  Kabeljou form huge shoals and occur mainly in the surf zone between Meob Bay (24°31'S, 14°36'E) and Cape Frio (18°00'S, 11°48'E), but more predominantly in the southern region. Kabeljou is generally sluggish, does most of its hunting in turbid or dirty waters detecting prey with its unusually strong sense of smell and its highly sensitive lateral line system. Silver Kob are therefore well equipped to feed at night and in dirty water. It will often take a bait, but then spit it out before finally seizing it. Kabeljou move around in shoals and are very rarely seen single. The worms that are sometimes reported to infest them are both rare and harmless to man if the fish is properly cooked.