The facilities at the Main Viewpoint overlooking the Fish River Canyon were upgraded by the Strengthening the Protected Area Network (SPAN) in teams of an agreement between the Ministry of Environment and Tourism, the United Nations Development Programme (UNDP) and the Global Environment Facility (GEF).

The upgrade includes a raised viewing platform built from local stone, shaded tables and benches where visitors can sit, environmentally friendly toilets and displays on various aspects of the canyon which ranks amongst the largest in the world.

The Fish River Canyon is the main attraction of the Ai-Ais Hot Springs Park and is the largest source of park entry fees to the Ministry after the Etosha National Park and the Namib-Naukluft Park – with an annual income of N$5 million (US$734 000 at current exchange rate) per year.

The Ai-Ais Hot Springs Park forms part of the /Ai-/Ais/-Richtersveld Transfrontier Park (ARTP) was established in terms of a treaty signed by the Namibian President and his South African counterpart in 2003. Two-thirds of the park are in Namibia, while the remaining third enjoys the protection of the Richtersveld National Park in South Africa.

Derived from TourNamibia
Posted by Unknown at 2:58 PM No comments:

Büllsport Guestfarm and their hiking trails 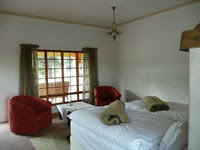 Ernst Sauber reports some exciting news from the Naukluft area.
Having a visiting black rhino from the Park next door has everyone very enthusiastic. Hikers who do the Zebra trail or the Quiver tree trail now have a realistic chance of spotting a black rhino. Should people be afraid to walk alone, they may ask the guestfarm for a guide to accompany them.
Further news from BüllsPort:
After extensive renovations to the large glassed dining room and lounge area, the guestfarm now sports a fresh and spacious atmosphere. In addition, the 6 new luxury rooms added to the existing 8 standard rooms, provide an extra choice for customers and more space for small groups in the high season.
BüllsPort is the ideal gateway for hiking activities in the Naukluft region with a variety of guided and selfguided trails on offer.
The scenic ‘’Quivertree Gorge hiking trail’ is Bülls-Port’s signature trail and should be experienced by every visitor’, therefore a minimum of a 2 nights stay would be recommended.
The fantastic Naukluft Experience package
offers a 3 night stay at a very special rate.
BüllsPort community support: Did you know that BüllsPort pays N$10 to the Nabasib Community for each guest booked at the guestfarm?
For further details email us at:
info@namibiareservations.com or visit our website:
www.namibiareservations.com/bullsporte.html
Posted by Unknown at 3:50 PM No comments: