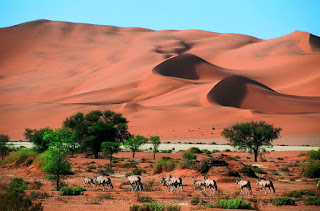 The Namib is a coastal desert in southern Africa. The name Namib is of Nama origin and means "vast place". According to the broadest definition, the Namib stretches for more than 2,000 kilometres  along the Atlantic coasts of Angola, Namibia, and South Africa, extending southward from the Carunjamba River in Angola, through Namibia and to the Olifants River in Western Cape, South Africa. The Namib's northernmost portion, which extends 450 kilometres  from the Angola-Namibia border, is known as Moçâmedes Desert, while its southern portion approaches the neighboring Kalahari Desert. From the Atlantic coast eastward, the Namib gradually ascends in elevation, reaching up to 200 kilometres  inland to the foot of the Great Escarpment. Annual precipitation ranges from 2 millimetres in the most arid regions to 200 millimetres at the escarpment, making the Namib the only true desert in southern Africa. The Namib may be the  oldest desert in the world and contains some of the world's driest regions. 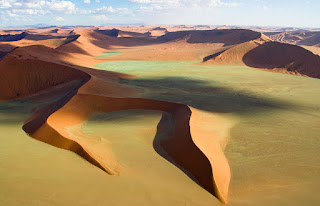 The desert geology consists of sand seas near the coast, while gravel plains and scattered mountain outcrops occur further inland. The sand dunes, some of which are 300 metres high and span 32 kilometres long, are the second largest in the world after the Badain Jaran Desert dunes in China. Temperatures along the coast are stable and generally range between 9–20 °C (48–68 °F) annually, while temperatures further inland are variable—summer daytime temperatures can exceed 45 °C (113 °F) while nights can be freezing. Fogs that originate offshore from the collision of the cold Benguela Current and warm air from the Hadley Cell create a fog belt that frequently envelops parts of the desert. Coastal regions can experience more than 180 days of thick fog a year. While this has proved a major hazard to ships—more than a thousand wrecks litter the Skeleton Coast—it is a vital source of moisture for desert life. 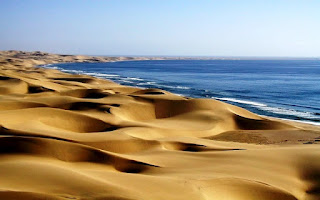 The Namib is almost completely uninhabited by humans except for several small settlements and indigenous pastoral groups, including the Ovahimba and Obatjimba Herero in the north, and the Topnaar Nama in the central region. Owing to its antiquity, the Namib may be home to more endemic species than any other desert in the world. Most of the desert wildlife is arthropods and other small animals that live on little water, although larger animals inhabit the northern regions. Near the coast, the cold ocean water is rich in fishery resources and supports populations of brown fur seals and shorebirds, which serve as prey for the Skeleton Coast's lions. Further inland, the Namib-Naukluft National Park, the largest game park in Africa, supports populations of African Bush Elephants, Mountain Zebras, and other large mammals. Although the outer Namib is largely barren of vegetation, lichens and succulents are found in coastal areas, while grasses, shrubs, and ephemeral plants thrive near the escarpment. A few types of trees are also able to survive the extremely arid climate. 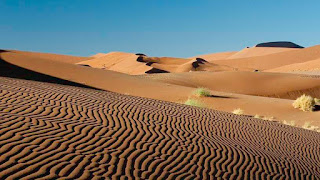 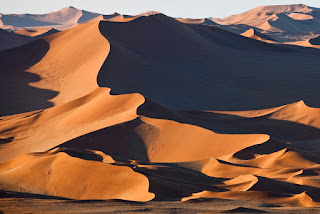 Posted by Unknown at 4:46 PM No comments: