For the best 4x4, camping and car rental while on vacation in Namibia look no furhter than the specialists at Asco Car Hire in Windhoek.

They are the largest rental company, specialized in 4x4 vehicles and fully camping equipped 4x4 vehicles, in Southern Africa.
Their fleet consists of more than 200 rental vehicles with different makes, types and configurations available. Everybody will find his/her preference. All their vehicles are new or very recent. All vehicles are being maintained to perfection and are subject to a comprehensive service every time before they hand them over to clients.

Increased frequency on Walvis Bay – Cape Town, from 3 flights per week to 6 flights per week. Existing flights operated on B737-500 and the 3 new rotations operated on ERJ 135. New departure times are: WVB-CPT depart 10:45, arrive 13:50 and CPT-WVB depart 14:40, arrive 15:45. These flights will be operated daily except for Saturdays. Additional frequencies start 15 April 2011.

Departure and arrival times on the JNB-WDH, CPT-WDH and WDH-Luanda routes were adjusted to meet travellers’ needs offering better onward connections. Morning flights from JNB to WDH, as well as from CPT to WDH now depart at 07:00 and arrive in WDH at 08:00 (ALL TIMES are local at airport of departure or arrival). This schedule allows our clients a full business day in Windhoek due to earlier arrival times. Departure times from Windhoek to both Cape Town and Johannesburg are at 16:40 and 16:55 respectively, affording our esteemed customers early arrival at their destinations be it for home, or in time to catch onward connecting flights to various destinations.

Luanda – Increased Frequencies Operating hours of the Windhoek - Luanda route have also been improved, departing from Windhoek at 09:30 arrive in Luanda at 12:00. The return flight leaves Luanda at 13:00 arriving in Windhoek at 15:25. We are pleased to announce further that our new and additional frequency to Luanda on Thursdays started on 30th March 2011, and that the new flight was well received and appreciated by the market. New fare structure and fare basis on the JNB-WDH route, highlight the key thereof

Windhoek - Rundu – New on our route The new Rundu - Windhoek received overwhelming response and is currently doing well. We look forward to seeing you on this new exciting route opening up Namibia’s markets.

For more details or flight bookings contact us at info@namibiareservations.com
Posted by Unknown at 6:45 PM No comments:

Local news from the Gondwana Collection

Enjoy the Wonders of Nature at Leisure
Guests of Namib Desert Lodge who want to participate in an organized excursion to Sossusvlei have to rise early. Because the colours of the desert are at their most beautiful and resplendent in the first light of the morning. And the ascent to the top of the highest dunes on earth is not quite as taxing in the freshness of the new day. It will definitely rev up the circulation of any morning grouch and the reward is a magnificent view across the dune landscape and Sossusvlei, currently filled with water - which is a very rare sight. Namib Desert Lodge acquired a second all-wheel drive with eight passenger seats this month. This means that the two vehicles can now take a total of 16 guests on a leisurely excursion to Sossusvlei every day. Professional guides provide details on the specific features of the landscape, the fauna and flora.
Gondwana Cañon Park a Garden of Eden
All internal fences have now disappeared in Gondwana Cañon Park. The last section of 15 km of fencing along the public road near Holoog was taken down in January. In total, 500 km of fences have been removed. They were a relic from earlier farming activities. Foraging game needs to be able to move around as freely as possible in order to survive. The park is situated in the Nama Karoo Desert where rainfall usually is scarce and scattered. Since its inception in 1995 only game species which once were indigenous to the region were reintroduced to the 1,260 km² nature conservation area, among them hartebeest, wildebeest and plains zebra. This year, however, game animals find more than enough food almost everywhere. In January 25.1 mm of rain (monthly average 19.9 mm) were recorded and in February 61.5 mm (31.2 mm). All of the park’s seasonal (mostly dry) rivers were in flood at some stage. Everything is sprouting and blooming now, the game is well-fed. In January the park rangers watched a herd of 140 springbok grazing in the grassy plains. The camera traps at Jagpos and Jakkalsdam took pictures of two leopards.
Menu enriched by traditional Speciality
There is a new delicacy on the menu of Damara Mopane Lodge: roasted Mopane worms. They are harvested on site, just like the vegetables, herbs and fruit. The worms, or more correctly caterpillars, are picked from Mopane trees around the lodge. Our guests react differently to this new speciality - which in fact is a traditional, regional one. Some leave it at a curious glance into the bowl, others valiantly reach into it. Mopane worms occur only in southern Africa and are usually unknown to guests from other continents. In its distribution area in Africa the caterpillars are an important source of protein for millions of people. For many it is also a desperately needed source of income.
For more information email us at info@namibiareservations.com
Posted by Unknown at 6:22 PM No comments:

Posted by Unknown at 9:49 AM No comments: 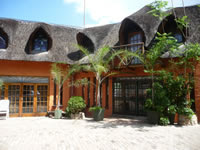 Sand Rose Guest House offers a peace and quiet haven to unwind and relax. We are situated 5 minutes walk away from Kubata Lodge (one of the best Portuguese restaurants and Joe’s Beer House, if you want to experience true Namibian cuisine). We are only 10 minutes walk away from the city centre, alternatively you can make use of your transport.

The Cape Whale Route was officially launched at a gala celebration in Hermanus recently. The route was designed to highlight the various tourism attractions in the region, including whale-watching, shark-cage diving, wine routes and eco-tours. Says Clinton Lerm, Chairman of the Cape Whale Coast Destination Management Organisation: “The name ‘Cape Whale Coast Route’ was not created as a marketing tool but as a way to draw attention to the wealth of wonders, both natural and man-made, that can truly be found nowhere else in the world. It was time for South Africa's 'Undiscovered Gem' to be discovered.”
Derived from: Tourism Update
Posted by Unknown at 11:53 AM No comments:

KAISOSI RIVER LODGE Chris has advised us that Kaisosi River Lodge is definitely operational. It is only the road leading to Kaisosi, which is under water, and if your clients do not want to drive through, they can leave their vehicle at a secure parking area. The lodge will then pick them up from there. The river is quite high, but lower than last year.

KALAHARI RED DUNES LODGE Even though the lodge is new the owner keeps improving things as feedback comes back from visitors. Currently they are busy building thatched roofs in front of every chalet so that the entrance and the little terrace in front are under shade. Five units will receive air-conditioning for the time being. All chalets will be fitted with fridges, and he is planning to replace the current beds with antiques dating from the German colonial time around 1905. The terrace by the swimming pool and the outside terrace from the restaurant have received more shading as well. 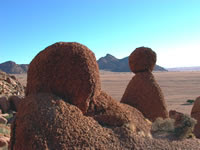 Emanya@Etosha is a 5-star safari lodge situated a mere 20 minutes' drive from the renowned Etosha National Park – the ultimate African wilderness experience. Privately owned, Emanya@Etosha accommodates up to 40 people, and offers the ideal conference facilities as well as an idyllic wedding venue overlooking a waterhole.

For more details please visit our website at:
www.namibiareservations.com/emanya_etosha.html
Posted by Unknown at 4:45 PM No comments:

Please contact us for more details or if you would like to book an establishment:
info@namibiareservations.com
Posted by Unknown at 11:12 AM No comments: