Namibia's wildlife is a key reason why many visitors travel here, and below is a little information on some of Namibia's cats and dogs – concentrating on aspects that are specific to Namibia.

Lion
Africa's largest predator, the lion is the animal that everybody hopes to see on safari. It is a sociable creature, living in prides of five to ten animals and defending a territory of between 20 and 200km².
In Namibia, lions are occasionally reported in the Kaokoveld or in the Central Highlands, but Etosha and the Caprivi's parks are the most reliable places to see them. Occasionally, they used to find their way down river valleys and take seals on the coast as prey. However, there are no reliable reports of this in recent years. 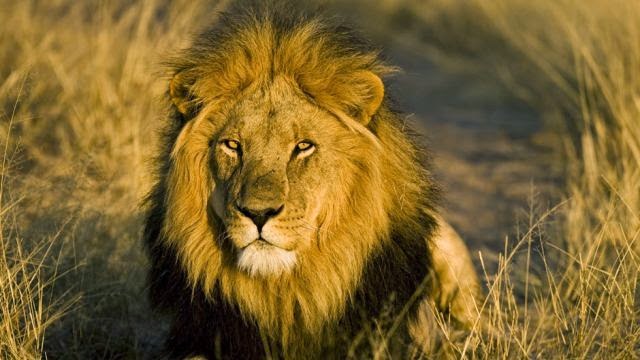 Leopard
The powerful leopard is the most solitary and secretive of Africa's big cats. It hunts at night, using stealth and power, often getting to within 5m of its intended prey before pouncing.
Leopards are the most common of Africa's large felines, yet a good sighting in the wild is extremely unusual – in fact there are many records of individuals living for years undetected in close proximity to humans. They occur everywhere apart from the desert, though they favour habitats with plenty of cover, like riverine woodlands and rocky kopjes. Namibia's Central Highlands are perfect for leopard, which are common on the farms there. Some lodges, like Okonjima, encourage sightings by offering them food. 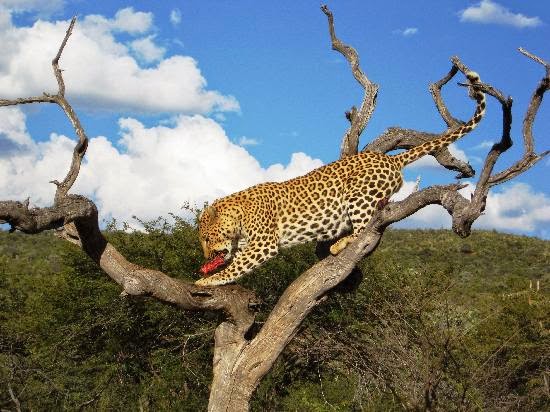 Cheetah
This remarkable spotted cat has a greyhound-like build, and is capable of running at 70km per hour in bursts, making it the world's fastest land animal. A diurnal hunter, cheetah favour the cooler hours of the day to hunt smaller antelope, like steenbok and duiker, and small mammals like scrub hares.
Namibia probably has Africa's highest cheetah population – estimated at 25% of the world's population. This is largely due to the eradication of lion and spotted hyena from large areas of commercial farmland, where cheetah are not usually regarded (by enlightened farmers) as a threat to cattle. Etosha is Namibia's best park for cheetah in the wild, though there's probably a higher density of them on many farms. 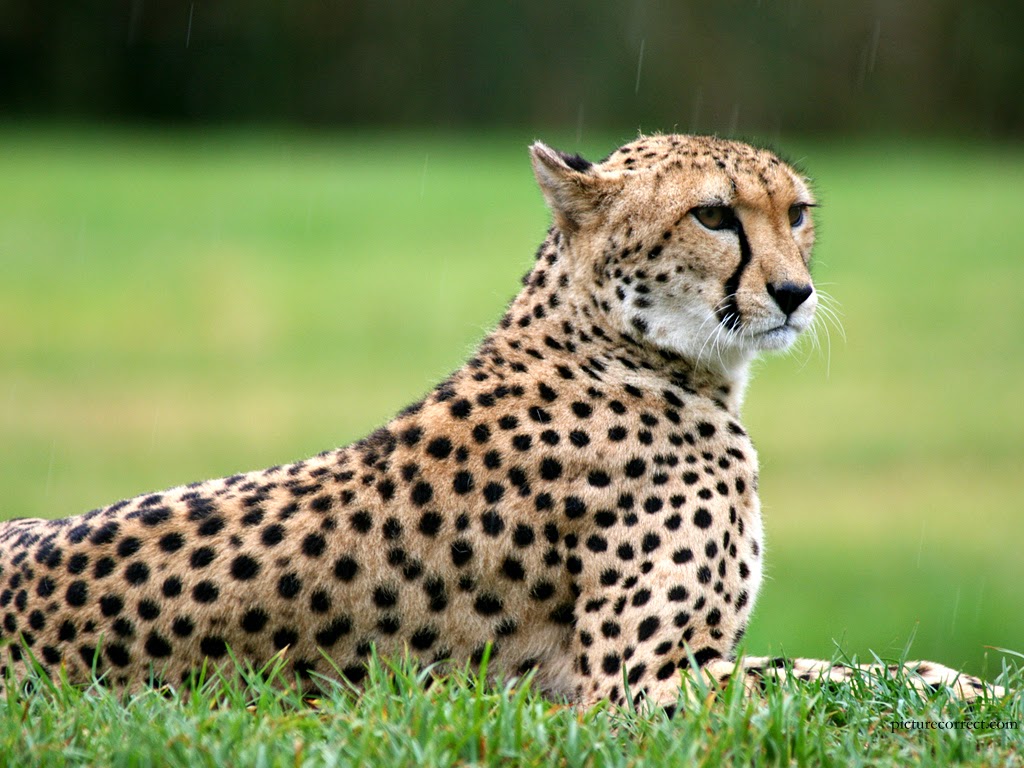 Serval
The serval is smaller than a cheetah, but has a similar build and black-on-gold spots giving way to streaking near the head. Seldom seen, it is widespread and quite common in moist grassland, reedbeds and riverine habitats throughout Africa, including Owamboland, Etosha, Bushmanland and the Caprivi Strip. It preys on mice, rats and small mammals, but will sometimes take the young of small antelope. 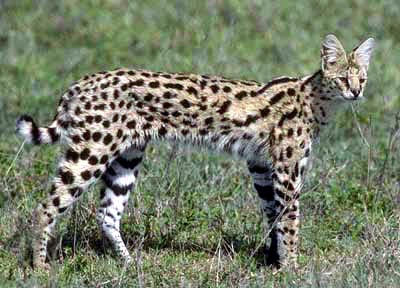 Caracal
The caracal resembles the European lynx with its uniform tan coat and tufted ears. It is a solitary hunter, feeding on birds, small antelope and young livestock. Found throughout the subcontinent, it thrives in Namibia's relatively arid savannah habitats, and occurs everywhere except the far western coastal strip of the Namib. It is nocturnal and rarely seen. 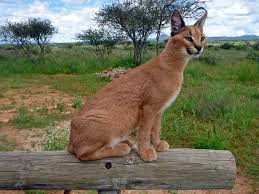 African Wild Dog
Also known as the painted hunting dog, the wild dog is distinguished from other African dogs by its large size and mottled black, brown and cream coat. Wild dogs prefer open savannah with only sparse tree cover, if any, and packs have enormous territories, typically covering 400km² or more. They travel huge distances in search of prey and so few parks are large enough to contain them.
In Namibia wild dogs are sometimes seen in Khaudum or on the Caprivi Strip. Botswana's nearby parks of Chobe and Moremi are one of their last strongholds, and so they certainly move across the border. Attempts to reintroduce them to Etosha have so far failed. 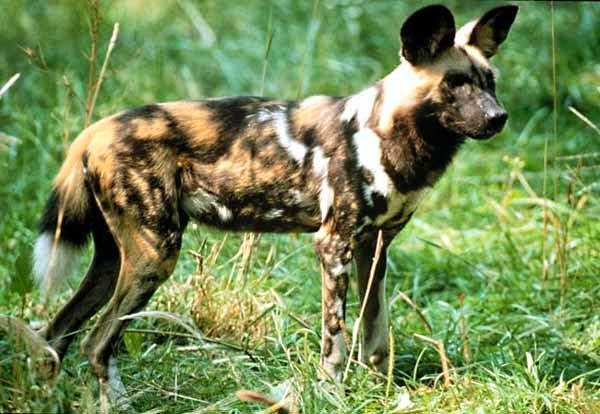 Black-backed-Jackel
The black-backed jackal is an opportunistic feeder capable of adapting to most habitats. Most often seen singly or in pairs at dusk or dawn, it is ochre in colour with a prominent black saddle flecked by a varying amount of white or gold. It is probably the most frequently observed small predator in Africa south of the Zambezi, and its eerie call is a characteristic sound of the bush at night. It is found throughout Namibia, excluding the Caprivi Strip, and particularly common in Etosha, where it is frequently seen inside the restcamps at night, scavenging for scraps. 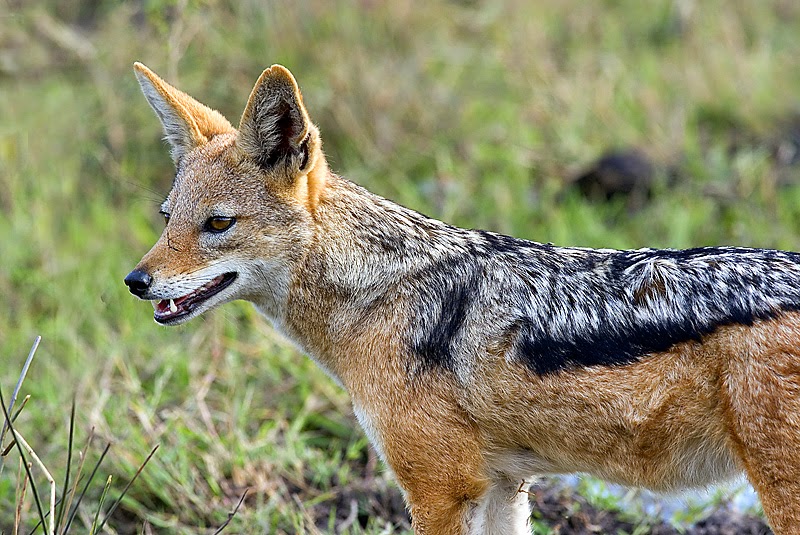 Posted by Unknown at 9:43 AM No comments:

The hotel was established in 1968 by the Rapmund Family. As from 2008 the new owners Sonja and Enjo Mueller have been operating Hotel Pension Rapmund on a family oriented basis.
They offer 20 standard en-suite double rooms (of which 4 have a direct sea-view), 2 family- units and 2 luxury suites at very reasonable prices. 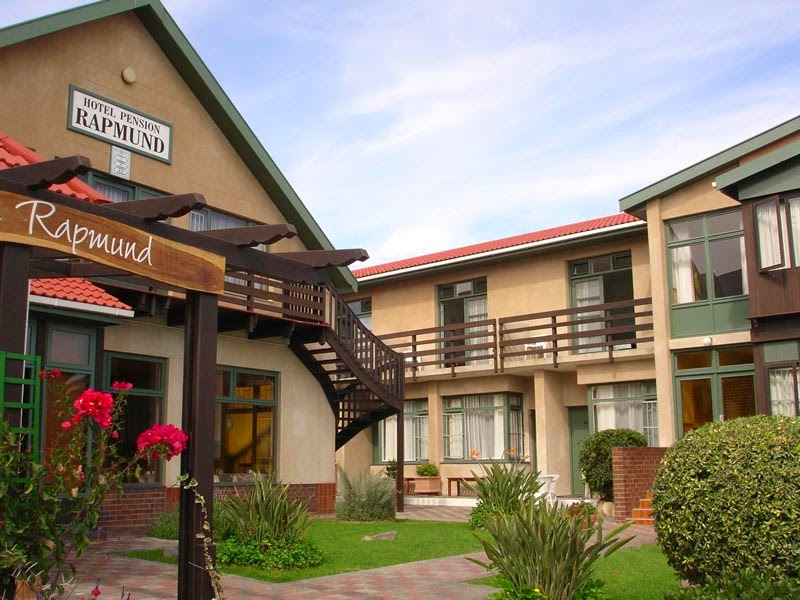 There is so much to do in Swakopmund, that if you so choose, your day will be filled with overwhelming thrills and fun!
All activities can be arranged for you
Posted by Unknown at 10:05 AM No comments: