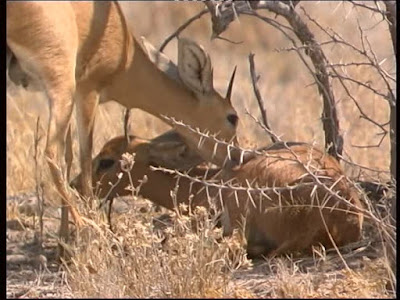 The Kirk's dik-dik  is a small antelope native to Eastern Africa and one of four species of dik-dik antelope. It is believed to have six subspecies and possibly a seventh existing in southwest Africa. Dik-diks are herbivores, typically of a fawn color that aids in camouflaging themselves in savannah habitats.  They are also capable of reaching speeds of up to 42 kilometers per hour. The lifespan of Kirk's dik-dik in the wild is typically 5 years, but may surpass 10 years.  In captivity males have been known to live up to 16.5 years, while females have lived up to 18.4 years.

Dik-diks are some of the world's smallest antelopes, with the largest, the Kirk's dik-dik, standing between 14 and 18 inches tall and weighing no more than 7.2 kg. Female dik-diks tend to be 1 to 2 pounds heavier than males. Dik-diks are dainty creatures with a pointed, mobile snout, large eyes and ears, prominent preorbital glands, pipestem legs, hare-like hind limbs that are significantly larger than their forelimbs, and a vestigial tail. Their coats, depending upon their habitat, range from grey to gray-brown with tan flanks, limbs, and an erectile head crest and whitish eye rings, ear lining, underparts, and rump". 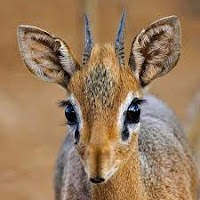 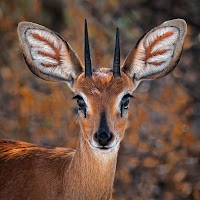 Similar to other dwarf antelopes, Kirk's dik-diks exist in monogamous pairs on territories. Territories are marked with dung and urine that are deposited in a ritual that is performed to help helps maintain pair bonds. During the ritual, the female will excrete, followed by the male, which samples the female's urine stream to check her reproductive capacity. He paws over and then marks his dung and urine over her deposit. Finally, the pair marks nearby twigs with secretions from their pre-orbital glands. Kingon 1982 states that, "The male courts the female by running up behind her with his head and neck stretched and his muzzle pointing out in front. Copulation begins with the male standing on his hind legs behind the female and waving his forelegs at an acute angle to his own body in the air over her back". Copulation typically occurs anywhere between three and five times within a 9-hour period. 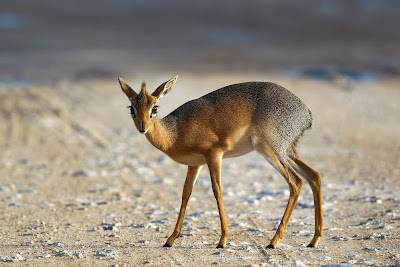